The elves were obviously busy in Forrester’s mansion, because every inch of the place was decorated. And there’s plenty of mistletoe around, giving Paris and Zendy a chance to share some hugs in front of the raging fire. Everyone gets dressed while they catch up to each other. Eric’s famous Eggnog is a hit, while Brooke, Quinn, and Ridge discuss Rick and RJ skating. While Brooke wishes they were home for the holidays, Ridge assures everyone will be together for a video chat the next day.

Carter arrived and Quinn, hoping to avoid trouble, began suggesting to Brock that “before one of us says one thing it will stop the other…” But Brock interrupts him to say they won’t, not today, and the women agree to a temporary ceasefire. Eric and Quinn take turns cuddling under the mistletoe while Zindy, Paris and Carter worry that maybe they shouldn’t be standing near the fireplace given how strong the eggnog can be. Everyone is looking forward to watching the kids open their presents in the morning.

MORE: Tanner Novlan shares a magical moment with his daughter

Brock and Ridge read Douglas and Beth’s story before Eric arrived serving champagne. Not to worry, he says, as he’s not an alcoholic. “They say it’s as good as champagne without actually being champagne,” enthused. (Yes, right.) Both Brooke and Ridge agree that you’d never know it wasn’t the real thing. (Would anyone?) Eric says how much he would love to have a home full of happiness and joy. “Here’s the night and all the memories we’re going to make,” he said while everyone banged cups.

At the cottage, Douglas is excited to go to the main house for hymns and biscuits. Hope assures the little boy that she will soon be joining them, but first she will spend some time with her father, Deacon. When Liam and Douglas arrive at the main house, Carter assumes Hope is still unloading things from the car and instead of saying, “Dude, we live on the property,” Liam explains that Hope is spending time with her father. “Well, at least you didn’t invite Dickon here,” Snaps Ridge. 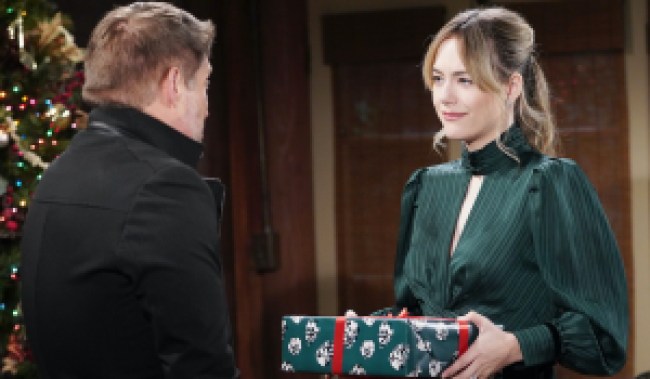 more: Evaluation of the confrontation between Taylor / Brooke

The deacon arrives at the hut with gifts. Wanting children to like him, he suggests one should “never underestimate the power of a bribe.” Hope gives a gift, and she feels back because he didn’t get anything. (Wait, what? I hope she doesn’t get her dad who’s willing to risk family relationships with a gift?) Of course Deacon says she actually gave him the best gift ever by spending time together. Soon, he’s ready to leave so you can head to the main house. “Give everyone the best of me,” he says, adding, “Well, whoever accepts the idea.” “So mom, sort of?” Hope asks, and they laugh because that’s it. “Give Brooke my best, softly, maybe a whisper,” he suggests. Hope and Deacon are looking to the future, and perhaps next year, the situation will be more normal.

It’s all happiness and light in Stevie and Finn’s house…at least until Stevie mentions that their “last guest” is arriving soon. Stevie is still not convinced that inviting Sheila was the best idea ever, and Thomas agrees. But Taylor explains that by giving Sheila a little of what she wants, he will prevent her psychosis from thriving. “Plus, this gives me an opportunity to study it in a safe place,” Shrink adds. “She says it’s fixed. If it is, I’ll know.” And with that, Sheila arrives. Things immediately get awkward as she thanks Stevie for inviting her and Taylor for her encouragement. 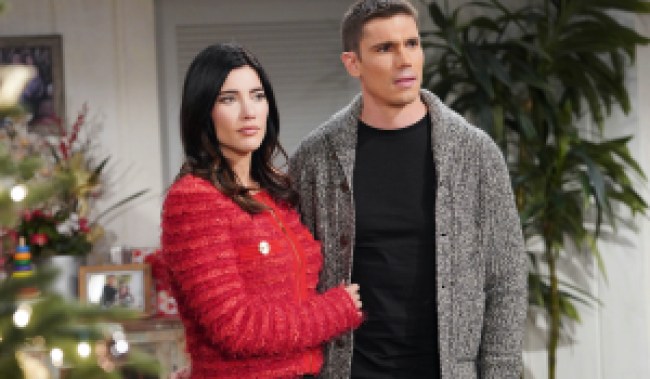 Stevie takes Sheila aside to warn her not to plan on hanging out. “One drink won’t stretch in half,” she says, and she agrees to let Sheila spend a few minutes with Finn and Hayes before she has to eat. Finn comes with a glass of wine and says his dad – sorry, he biological Dad – somewhere is trying to sort things out with me. Sheila is thrilled that she is finally vacationing with her family, just as she’s been dreaming of for years. (I wonder how the rest of Sheila’s kids, who haven’t even been mentioned since her arrival, feel like they’re standing out at Christmas for the new kid on the block?)

Speaking of family, Taylor says, ready to make an announcement: She plans to stay in Los Angeles. Hayes wakes up, and Stevie goes to have the baby. While she’s doing this, she thanks Sheila Taylor for giving her a chance. “I was a different person at the time,” Sheila insists. “We were both,” Taylor nodded (wink wink, prompting a beep when paraphrasing). Stevie goes out with Hayes and, despite his apparent reluctance, allows Sheila to carry the baby. Taylor and Thomas are watching from the sidelines, clearly both uncomfortable with the situation. For her part, Sheila is smiling from ear to ear.

Back at Eric’s place, he sits at the piano and sings with Douglas and Paris. Across the room, Liam asks his wife how her time with Dickon went. She smiles, “It was all I wanted and more.” With dinner about to be served, Brooke toasts, saying she’s glad they can all put their differences aside for tonight. Others chime in, saying how nice it is to celebrate peace and joy (“and eat the pie,” says Douglas, as Ridge suggests, “what others think.”) 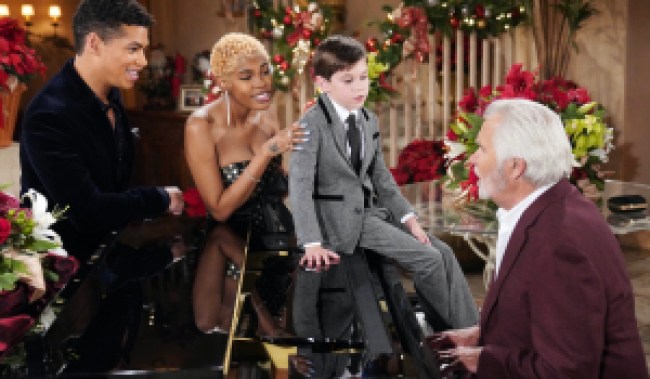 Thomas Finn tells of a camping trip he apparently took at one point. Excusing herself, Sheila crosses the room and happens to be in a perfect position to hear Taylor tell Stevie how much she wants Ridge to be there. But Taylor stopped herself, saying, “I’m not going to do that today.” However, with ominous hints of music, Sheila heard enough to put some non-Christmas thoughts in her head. While everyone is getting ready to eat, Sheila reads the room and tells her it is time to leave. She thanks everyone, especially Taylor, for including her. “This is a memory I will never forget,” Sheila says. “This is the best birthday I’ve had in a very long time.” 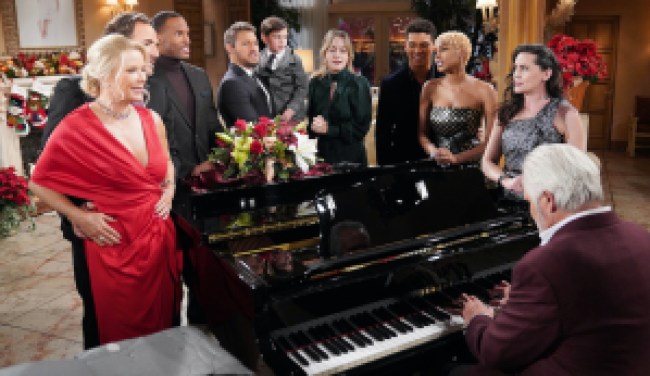 Eric reminds his guests of the true meaning of Christmas, saying that they are there to remember the life and teachings of Jesus. “It can be the spirit of Christmas every day,” he reminds them. Ridge says, “Treat people with kindness. With respect. Hold on to that feeling we have now, I don’t know, always make it part of who we are. This is how we should treat people, with this planet… If we can do that, we’ll be Fine “. (Anyone else kind of wish that Dickon had walked at that time so we could see if Ridge had been able to practice what he had just preached?) With that, the lovers kiss, the children open the gifts and everyone gathers around the piano to sing.” Jingle Bells”.

next to or next to Bold and beautiful: Dickon is in a difficult place…between Brooke and Sheila!

As we continue to admire how easy Krista Allen gets into Taylor’s shoes, find out if she made our list of the 30 best reworks of all time via the gallery below! As an added bonus, find out how you feel about who made the top ten… and who landed at number one.

Please note that if you purchase something by clicking a link within this story, we may receive a small commission from the sale.

Miss today’s episode? Catch up via Paramount Plus.